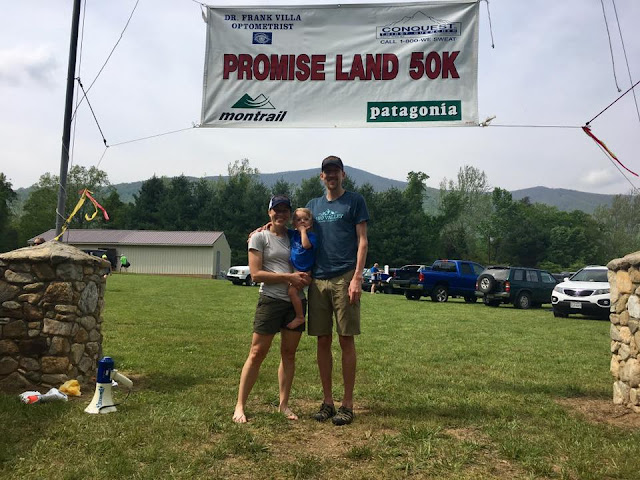 The Promise Land 50K++ has been a staple race on the east coast for many runners over the past 17 years.  Race Director David Horton, and the entire trail and ultra community that's been built in Central Virginia, has created a race that offers a beautiful course and a low-key but yet inclusive pre- and post-race atmosphere.  Like many races in the Lynchburg, VA area many of the runners will elect to camp at the start/finish area giving the race a close-knit feeling that makes ultra running special.

My first experience at Promise Land, which is 3 miles longer than an actual 50K, was in 2012 as a spectator.  That was the year Eric Grossman set the course record, coming from behind and passing a young Kalib Wilkinson in the last 6 miles, and dipping under Clark Zealand's course record from 2002.  This was a major goal for Grossman and he had come up short of the course record several times in previous years.  I still remember the emotion Grossman displayed after finishing the race that year, breaking down in tears of a mixture of exhaustion and accomplishment.

Since that year of spectating I've wanted to run Promise Land and experience the course, atmosphere, and challenge of the competition.  From the time I lived in Virginia for a bit I had been on every section of the course on training runs a time or two.  Seeing Grossman's performance was inspiring to me; Grossman was a huge influence in my ultra running beginnings and was one of the first mentors I had when starting to dabble into long trail running.  I wanted to go for his course record, and use it as a tribute to the positive influence Grossman has had in my life. 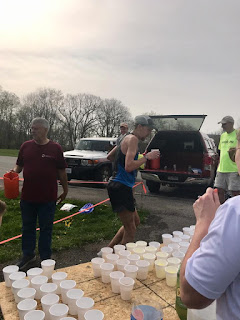 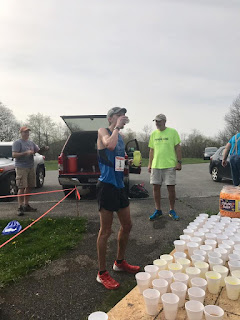 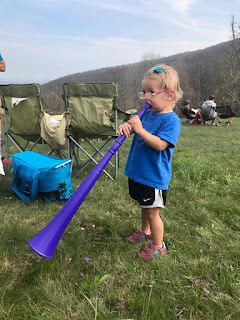 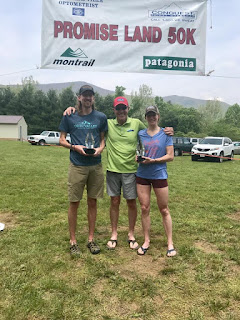 An early wake up announcement from Horton on the bullhorn got the camping field buzzing as people emerged from their tents or RV for the 5:30am start time.  I've camped at races many times but for Promise Land my wife and I both were running the race, and our 2 year old daughter slept between us in our 2-person tent.  Grossman wrote about his fitful night of sleep in his campervan with his then 2 year old daughter in his 2012 race report.  Fortunately for my wife and I our daughter slept brilliantly and we got a full nights sleep (as much as that is for a 5:30am start).  Big props to my sister for watching Fern during the day and even toting her around the course!

The race starts on a 4 mile gravel forest road gaining over 2,000 feet until it reaches the first trail.  It was cool and dim but the forecast was calling for a very warm day.  After the race Horton said this was the second hottest Promise Land in the 17 years but this year might have been harder because of higher humidity.  I had a close eye on Grossman's CR splits and was content letting one runner go ahead, out of sight, and settle in behind a few others.  Once we entered the trail Sam Chaney, who was making his ultra debut, and I settled into 2-3 together.  We ran the grassy road into the Reed Creek AS at mile 9.7 where we finally saw the first place runner.  Sam and I were quick in and quick out and moved into 1-2.

At this point in the race I was happy with my own effort and position in the race, but I was already 6 minutes slower than Grossman's CR pace.  I knew I wanted to go out a bit conservative and gain ground on his ghost later in the race but being 6 minutes back really showed me how hard he pushed from the gun.  Heading across the ridge to Sunset Fields at mile 13.7 Sam opened a gap during a gravel downhill.  The section after Sunset was a steep, sometimes technical, downhill for 4 miles.  I felt good flowing down the singletrack and was able to catch up to Sam and we ran into Cornelius Creek AS at mile 17.8 together.

After Cornelius Creek Sam and I crushed a few low 6 minute miles on a gravel forest road before entering "The Dark Side."  I knew this section of the course could be a deciding point in the race; The Dark Side isn't the hilliest or most technical section of the course, but it's remoteness and closed in feeling can really press on you.  Colon Hollow AS is mile 20.8 and the most remote point of the course.  Leading into this aid station Sam and I were still running together but I began to feel stronger on the uphills compared to earlier in the race.  After leaving Colon Hollow I pushed ahead and began to open a gap into first place. 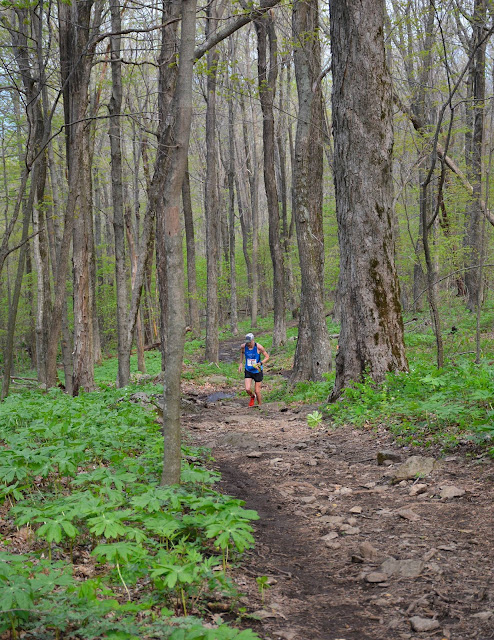 The ultimate experience in running is when you morph into a flow like state and are able to see yourself from a "birds eye view."  Around mile 22 I started to really feel that flow.  Even though I had only run these trails once or twice before, and 5 years ago, I had deja vu moments where I was remembering the terrain and distinct physical features of the trail.  This flow state carried into one section of the course I was looking forward to the most, Apple Orchard Falls.  Apple Orchard Falls is a 2,000 foot climb over 2.9 miles that starts at mile 26, meandering in and out of the falls on rocky technical trail that includes wooden steps and scenic vistas.

I was still 10 minutes behind Grossman's Ghost heading into the big climb, and knew based on his splits that this was the section I could gain some ground.  I figured the course record was out of reach at this point but knew if I kept pushing hard up the climb and tried to make up some of that time it would take a lot of effort for anyone behind me to catch up.  Fortunately I had the legs to grind up the falls and only needed to walk on a couple of the steep wooden steps.  When I reached Sunset Fields at mile 29 with 5 miles remaining I had gained a few minutes on my CR deficit but was still 7 minutes back.  The last 5 miles are all downhill, getting to run down the same gravel road that the race starts up.  After a few 5:30 miles I came into the Promise Land, 5 minutes slow than Grossman's CR Ghost, but in first place and given it a solid effort. 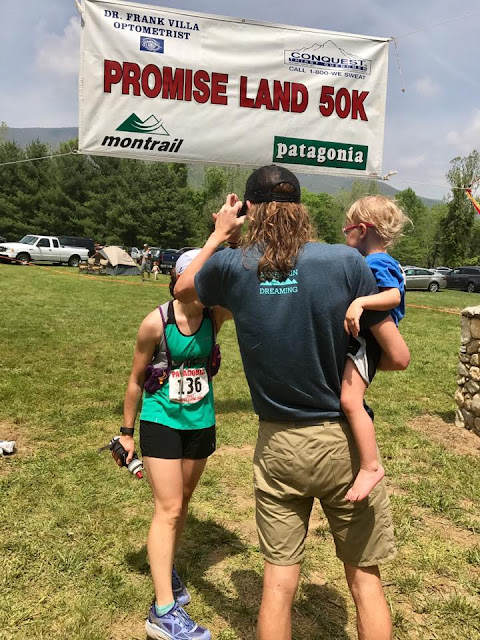 After finishing I got to hang out with my daughter at the Promise Land camp, soak in the creak, and clean up while we waited on Bobbi to finish.  She did great coming in under eight hours.  It was awesome seeing her put in a lot of hard work, running early in the morning before work and still being a great wife and mother.  This was her third 50K, second in the two years after having Fern, and the hardest course she has run.  We stuck around until all the finishers had come in before tearing down our camp, capping off a fun weekend in the mountains.

Promise Land 50K++ is a special race.  The beautiful course that presents a lot of difference variables for the runner, the classic ultra and Horton atmosphere, and all the participants and volunteers make this a true gem.  I didn't quite reach my "A" goal but I am really happy with the outcome and that I was able to push hard while feeling good and giving the course record an attempt.  Maybe next year I can go back and try it again! 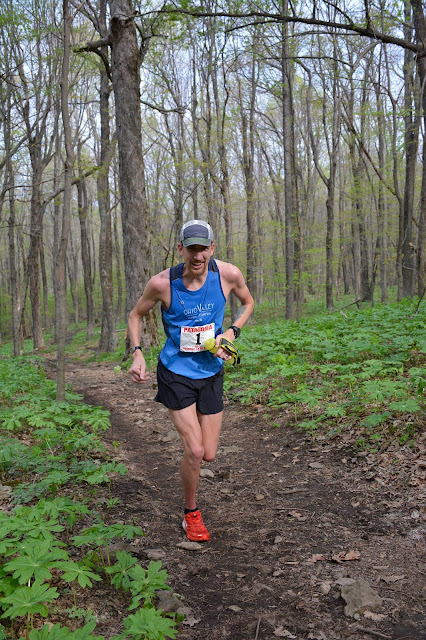 Two weeks before Promise Land I toed the line at the 50th consecutive running of the Athens Ohio Marathon.  This hometown race is the longest consecutive run marathon in Ohio, and I didn't want to pass up the opportunity to run this anniversary run.  I've been on the event planning committee for for several years and wanted to be a part of the local running growth in Athens.  Plus, the race served nicely as a training race leading into Promise Land and summer races.

The main goal was to run with Mike Cooper for the first half and help him set a marathon PR.  Mike has been a great addition to the running community.  He started running for the first time at age 32 and in just three years ran his first 100 miler and has become one of the strongest ultra trail runners in our region.  His previous marathon PR was 2:52:xx and I'm happy to report that he ran 2:47:xx for 2nd place.

I ran with Mike for the first 14 miles before starting to drop the pace.  My legs responded nicely and I was able to move into the 5:40-5:50 range, with some 5:30's near the end, after running the first half between 6:00-6:10.  It's always nice to feel good at the end of a marathon and to win in front of a hometown running community.  I really enjoyed seeing my friends and people I've met at Ohio Valley Running Company on the return side of the out and back course.

If you're looking for a spring full or half marathon with around 1,000 runners I suggest checking out Athens.  The course is FAST, FLAT, and scenic as it runs in the Hocking River Valley along the Hockhocking Adena Bikeway after starting in beautiful Uptown Athens.  It's a great event. 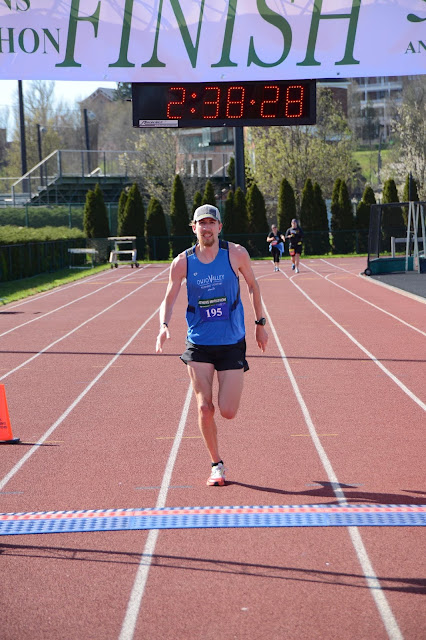 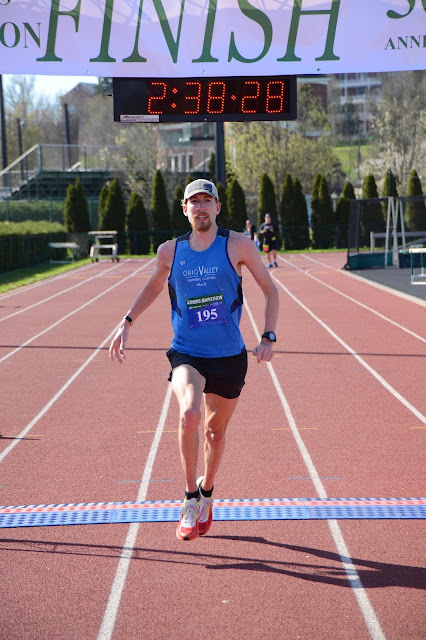