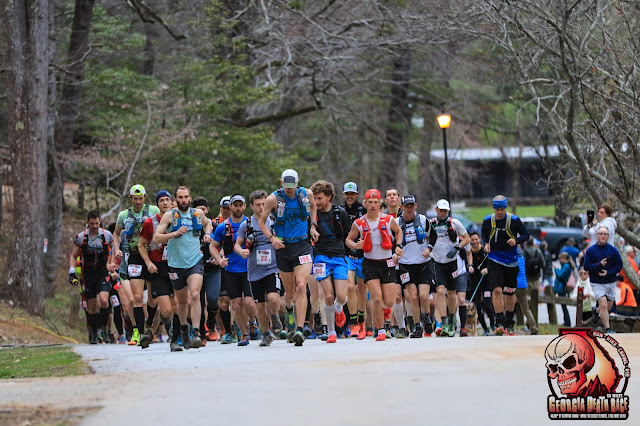 Last year I ran the Georgia Death Race on a reversed course that made the race much easier.  This year the course was switched to its original direction, plus an extra 5 miles of harder, technical trail was added near the end.  In 2015 the young and quiet Andrew Miller slowly pulled away from me over the last 25 miles of the race; I still ran a solid race though in 10.5 hours.  With the harder course this year everyone's time was much slower, and it took me nearly 2 hours and 40 minutes longer!  The young kid though, still under 20 years old, didn't miss a beat and instead of letting me hang around for 40 miles, he blew the race right open 5 miles in.  I never saw him again and he repeated as champion earning a Golden Ticket along the way.

The race now, meant going after that coveted second and last Golden Ticket, which in my estimate, at least over a dozen guys were vying for, me being one of them.  Second place stayed closer longer, but around 10 miles the less-than-one-year-old ultra runner, Caleb Denton, made the pack look slow on a steep North Georgia Mountain downhill.  After Caleb left us, the East-coast veteran and UROY Top 10er Brian Rusieki, Hokie Ultra Runner Darren Thomas, and myself ran 3-5 for a long time.  We chatted and had a good time catching up since we are all familiar with the east coast and Central Virginia ultra scene.  I ran about 60 miles with Brian at the 2014 Grindstone 100 before he pulled away and beat me by 25 minutes, so I knew he was a very strong contender here.
Running down into the Skeenah Gap AS (mile 21.5), the only out and back segment of the point-to-point course, we were able to see how far Andrew and Caleb were ahead of us.  I estimated that we were 12 minutes from Andrew and 6 minutes from Caleb.  While it sounds like a lot, 12 minutes was hardly anything to get overly worried about on a course like this one-third of the way through.  I was still feeling super-chill and knew exactly what was in front of us.

Last year the easy part of the course was at the beginning.  This consisted of about 30 miles of gravel/dirt fire roads of long ascents and long descents; I thrived on it, cranking sub-7 miles.  This year these sections were at the end of the race - my thought for race planning was to conserve energy and do some work on the fire roads in the last 30 miles of the course.  I knew if I still had some legs no one in the race could out run me.  As much as I pride myself on challenging, steep, technical mountain trails, the fact is that my raw speed is what I am best at in this point of my career.

In the next section Darren stepped to the side of the trail to take a leak and I figured he would come back pretty soon but I never saw him again.  I later learned that he messed up his achilles shortly after and had to drop at mile 47.  Now it was just Brian and I for a long while.  When I saw my crew for the first time at the Point Bravo AS (mile 28) I was still feeling fresh in 3-4 place with Brian.  As we were leaving the aid station together we saw another runner come in who we had seen earlier on the out and back section.  He looked good and had made up a lot of ground in the last 7 miles.
Brian and I worked together in the next section but the new runner quickly caught up to us and passed.  Brian was in front and didn't seem to want to go with him and I was still feeling good so I went with him on the quick downhill.  I soon caught up and learned his name was Dominick Layfield from Park City, Utah.  We chatted a bit and it was apparent that we were feeling about the same, running pretty quickly on the downs and flats and power-hiking most steep uphills.  Progress reports were sparse on the top two runners so I was still happy with being in 3-4 place and still moving pretty steadily along the trail.  It wasn't until Dominick pulled away from me a couple miles before the Long Creek AS (mile 41) that I hit a abrupt low point.

Low points always come.  Some more abrupt than others, some less low.  This one that hit was bad.  Like, things were going well and then I was going to drop out at the next aid station, if I ever reached it.  I sat down for about 30 seconds when I arrived to Long Creek AS.  I drank some ginger ale and mountain dew.  I still had 7 miles to Winding Stair where my crew would be.  The funny thing is that this is when the fire gravel/dirt roads started - the exact point of the race that I was looking forward to reaching so I could start to make up ground on the top 2!  I guess the age old realization that nothing ever goes to plan in an ultra is the truth.
I ran okay downhill but then had a 2.5 mile uphill into Winding Stair AS (mile 47) to see my crew.  I was in a horrible mood as I slowly walked up a runnable grade.  I was beating myself up about letting the thought of dropping out in my head.  When I finally reached the aid station Bobbi was there with baby Fern and my sister Becca.  I immediately sat down on the blanket - I just wanted to take my shoes off.  The aid station workers were great trying to get me fixed up but I couldn't even think about eating - eating was long in the past.  It was all ginger ale and mountain dew and the occasional potato chip at this point.  As I sat there on the blanket I told Bobbi that she needed to convince me not to drop out.  The conversation went something like this:
Me: "You need to really talk me out of dropping out right now."
Bobbi: "You can't drop out, you're doing great, you're in 4th place!"
Me: "I don't feel like it..... I'm tired of running."
Bobbi: "Tomorrow you will regret it if you drop out."
Me: "It doesn't matter.  Why would it matter to me if I drop?... it's just a race."
Bobbi: "Well you'll be a grump to be around and I don't want to drive all the way back to Ohio with you if you're going to be a grump."
Me: "................."

That was about the end of that conversation.  I guess she convinced me because I started putting a new pair of shoes on and finishing my third mug of ginger ale.  I stood up and meandered over to the aid station table.  The ladies there were great, but I still couldn't eat anything, just drink sugar.  All in all I took 11 minutes at Winding Stair before finally moving on.  I hugged Bobbi and Fern and started running.  No real chance to drop out now.

After leaving Winding Stair AS there was a steep 3 mile down hill that I knew was coming - I decided to push hard on this section in attempts to wake my legs up and start rolling.  This amazingly produced 6:33, 6:22, and 6:59 miles from 48-50.  Unfortunately this didn't last forever but I was at least making relentless forward progress.  Out of Jake Bull AS (mile 53) I relished a couple miles of faster road miles before starting the long climb up Nimblewell Gap.  I remember this section from last year when it was still early in the race going the opposite direction downhill; I ran 4 consecutive 6:30's miles.  This year it literally took over twice the amount of time going uphill as I struggled to maintain 15 minute hiking pace.  I probably only managed to squeak out 3/4 a mile of running over the 4 mile hill.  It dragged on and on until I watched the sun start to fade.
One of the only good things about taking much longer than planned for this years GDR was seeing the sun set over the distant mountains - it was beautiful.  The rugged North Georgia Mountains are no-joke.  They test your will, your mental and physical abilities.  I always feel better for going through it.  Whether it takes 10.5 hours to traverse through the mountains, or 13 hours to cover the same ground, I always feel better.  Being up on the ridge as the sun set, I was content.  The race didn't end like I hoped, but I had 7 miles to finish and knew I was okay.  I was just in the mountains doing what I love to do - I set out on these journey's knowing exactly what could happen, and what likely would happen.  It feels really good to be able to do that, no matter what the outcome is.  I wasn't going to Western States, not this year, but it didn't really matter - I had a beautiful daughter and a wife that convinces me to do the right thing when things get rough waiting for me at the finish line.  And on that note the sun dipped below the horizon a final time, I turned to face downhill, flicked on my headlamp, and started to run.