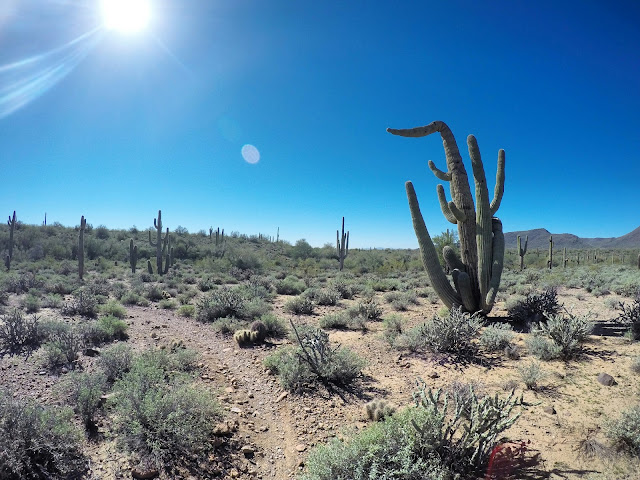 Coming into the year I was really interested in a few of the early Western States Golden Ticket races.  I was originally registered for the Bandera 100K in January but I came down with a 3 day flu that put me out for a few days the week of the race; so I quickly changed plans and entered the Black Canyon 100K hosted by Aravaipa Running in Arizona.  This would be a great option to go for a "Golden Ticket" and an opportunity to race in a desert environment which I had never done.  Plus, Aravaipa Running and Jamil Coury put on quality events on great courses.  I was excited to race for the first time in 8 months as well!

LEAD-UP
Leading up to the race there were some great names dotting the registration list.  A legend like Hal Koerner, former UROY Sage Canaday, fast road marathoners like Chris Mocko, and other recent top trail runners like Ryan Kaiser, Paul Giblin, and about a dozen other names I wasn't as familiar with.  It was shaping up to be a hot race, not just with fast runners, but literally hot temperatures in the Arizona winter.  I was keeping an eye on the weather forecasts and about two weeks before the race Phoenix only saw highs in the 50's for several days but as the race approached the forecasted temperature kept rising.  Race day temperatures called for high-80's - only about 80 degrees higher than the single-digit temperatures I came from in Ohio.

EARLY-MILES
The course is known for being a tale of two halves.  The race starts in Mayer, AZ at an elevation of 4000' but runs mostly downhill to around 2000' in the first 50K.  The second 50K then provides many little up and downs with a couple longer climbs.  This makes the first half of the race fast, and the second half much harder.  I had a pretty good grasp on last years winning splits and didn't want to go much faster, or faster at all, then their times as many of last years runners faded hard in the last half.  My goal was to hopefully conserve for a stronger second half and hope a fast pace gets the front runners like the previous year.
With someone like Sage Canaday in the race I feel like everyone sort of lets him dictate the early pace.  Once we started though I could tell there were a few others who wanted to push the early miles.  I settled into a pace that was still faster than last years winners miles but still nowhere near the front pack.  As Hal Koerner posted on social media later that day, this was a road 100K pace!  The winner of last years race, Ford Smith, went through the first 50K in about 3:50:00 so I was a bit taken aback when I was at 3:45:00 through 50K and in about 9-10th place!  The front group of Sage and others ended up already being about 10 minutes ahead and we were all on an alarming course record pace.  Below is a comparison of my first 50K mile splits compared to last years winners first 50K mile splits.


THE MIDDLE 18
I continued running well until about mile 34.  Charlie Ware and we had been running much of the race together but he slowly pulled away from me on a rocky and technical downhill at around this point.  Running into the short out and back section to the Black City Canyon Aid Station (mile 38), I saw that Charlie had already gaped me by about 6-7 minutes!  By this time, the temperature was already reaching 80+ and people were starting to feel those early fast downhill miles.  I came into the aid station in around 8th place after learning a couple guy had dropped out and after passing a runner shortly out of the aid station, I settled into 7th place.

I was feeling it by this point however.  But the interesting thing is, I think everyone else was feeling it just as much as I was.  The more I struggled for the next miles, the more I kept thinking someone, or many, were going to start passing me.  I was walking on the uphills, even walking easy flat trail.  I wish I could go back and get in the straight mindset during these miles but this is the challenge of ultras - some people have this innate or learned ability to be super present with themselves and be able to push through rough moments.  My best races I have been able to do this.  My legs were feeling pretty good, I was staying well hydrated, but the sun was frying my brain and making it hard to think clearly.  I just wanted to be done.  I knew I was not going to be done however for several more hours.  Eventually I got a hold of myself.
THE LAST 12
While the last 12 miles were anything but fast (just compare my splits to Sage's), I was at least feeling good and running most of the way.  Nothing special happened.  No one tried to pass me or I didn't see anyone in front of me.  I just got to mile 50 and started to sense the feeling of being finished.  I had been running since mile 38 without seeing another runner - still in 7th place.  I didn't know how close anyone was in front but was also pretty confident that if I just kept running, and since no one passed me during my slow 18 mile stretch, that I would make it to the finish no worse than 7th.

That is what happened.  As I ran into the last 2.5 mile section (the only part of the course that I ran on the day prior) I was feeling good and even able to run a few sub-8 miles!  The Western States Golden Ticket was out of the picture, but I was finishing a grueling race in an unfamiliar environment.  I stayed in 7th place overall behind 6 super-tough guys, and finished in around 9:17:06.

THOUGHTS
The desert was a tough place, and far from the single-digit temperatures that I was training in during Ohio's winter.  I hate to use the high temperatures as an excuse but I won't lie and say it didn't affect me.  All in all though, I think I handled the hydration part pretty well.  I wonder how some of the locals handled it.  The desert was also much different than most Eastern Ultras that are lush forests with shaded trails and green vegetation all over.  Besides the tall slender cactus and sparse juniper, there wasn't much growth above my head to provide shade.  These open and exposed vistas are certainly alluring in its own way however.  But there was a sense of loneliness in the desert during the final 26 miles when I didn't see any other runner.

The early pace was fast!  I knew it would be this way - and there is probably no getting around having a much slower second 50K than first, but my splits were alarmingly opposite.  Charlie Ware, who didn't pass me until around mile 34 ended up getting second place - his strong second half of the race was still much slower than our first half, but he executed the smart race that I had hoped to and battled tough during those hot and hilly middle miles.  And Sage Canaday was just on a different playing field winning the race by almost 50 minutes and setting the Black Canyon 100K course record by over 40 minutes!  Huge congrats to those two as they now make their way to Western States 100!  Anyone who managed to stay strong and finish on this grueling day deserves mad props!
THANKS!
I really appreciate all the support from back home and the friends and family that follow my ultra running adventures.  This was the longest I'd been away from home without baby Fern so it was tough not seeing her or Bobbi for 5 days.  They are constant sources of motivation in race.  I had a good time hanging out with Virginia/Ohio compadre Rudy Rutemiller and meeting his friend Dylan from Flagstaff.  We all stayed in a hotel together along with Ezra Becker from the Bay Area.  Rudy, Ezra, and I all finished the race which was a nice accomplishment and Dylan crewed and paced with Rudy the last 12 miles.  Their Bay Area running community vibe is infectious and something I look forward to seeing more of in SE Ohio!

This was a super well organized and directed race by Aravaipa Running and Jamil Coury and his crew.  I've been wanting to run one of their races for a long time.  The trail running community really shows at the aid stations and post-race festivities.  Some of the best aid stations I've experienced!  With the hotter than expected temperatures they were on top of getting water and ice to runners, and did great getting my bandanna filled with ice at each station.  Amazing organization and I'd recommend their races to anyone.

And thanks to my sponsors UGo Bars, Swiftwick Socks, SOS! Rehydrate, Julbo and Honey Stinger for supplying products and support that directly help me get through a race like this and the training leading up and recovery after.  Having these brands along make the preparation much easier and allows me to just focus on giving it my best during the race!

NEXT
I am currently registered for the Georgia Death Race 68 Mile on March 19, which is another Western States Golden Ticket race.  A big part of me wants to stop holding Western States up so high as a goal and just go off and run other races and wait for the lottery to get in, but the allure of participating in the most historic 100 miler has me pulled in.  So I will be toeing the line in Georgia looking for a top 2 finish - a race that I finished 2nd in last year when it was not a Golden Ticket race!  I will try to repeat and build on a strong race from last year.

I was also selected in the Cascade Crest 100 Mile that will be August 27.  I really look forward to seeing this course and region.  The Cascade Crest course seems to be my type of course!


A highlight video by Aravaipa Running: