The great debate in the ultra-sphere of how to train for ultra-races has seemed to level off over the past several months - partly because there are fewer big races this early in the year but mostly because people are realizing there is really no 100% correct way to train for an ultra (even more likely is because the topic was beaten to death).  There are simply too many people being successful in races who train in a different style.  Ultrarunning is completely subjective in that regard.  There are still questions that  I cannot answer about the sustainability of certain types of training...unfortunately it is impossible to sustain a high level of training for X amount of time and when many ultra runners are constantly on the edge in their training, it is important to discuss the limits of how far to go and for how long. 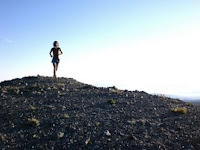 Many cases show runners training at a high level in terms of pure mileage and time.  Noticeably, and probably most recognizable, is Anton Krupicka's 2007 lead-up to the Leadville 100, when he ran over 1000 miles and 150 hours in a 5 week span - this is not even to mention what was sure to be an incredible amount of elevation gain.  This high level of training led to a 45 minute personal PR at Leadville and a margin of victory by over 3hours.  Was this sustainable?  Maybe for a couple month period it was... but from this post it seemed as if the sustainability ran out after he tried to resume his heavy training shortly after L100, as he had to be sidelined with an injury.  It should also be noted that the 5 weeks leading up to the 1000 miles in 5 weeks went like this: 0 mi., 63 mi., 32 mi., 29 mi., and 133 mi. 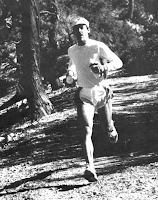 The Krupicka account is a micro-example of a very high level of training -really only over a 7 week period.  Another example of training at a high level, that I would love to learn more of, is Jim O'Brien's training for the1989 Angeles Crest 100.  O'Brien ran what is now considered one of the stoutest course records in ultra running, standing the test of time at17:35:48, over 50 minutes faster than any attempt thereafter.  This article lets us know a little about his AC journey.  So, this could be considered a macro-example of training at a high-level.  He focused his training on AC100 a year in advance and ran six weeks of peak mileage from 150-200 miles (I had previously heard he ran 200 miles a week for the 10 weeks leading up to AC, but this article proved otherwise).  We have good reason to believe that he built up to that 150-200 range in the previous months and weeks.


There are obviously many different types of training considered at a "high level" other than running high mileage alone(i.e. mountain running, speed work, etc.), but those types are not as demanding as spending the amount of time on ones feet (and the pounding in legs) that it requires to run 150-200 miles a week.  Every runner is unique and can innately handle different amounts of mileage for different amounts of time.  When someone tries to justifiably put a cap on people’s ability to handle a certain load, it can lead to lesser performance, so that is not the purpose here.  It should be more about people understanding that there is a certain limit, but smartly attempting to defy the odds of human expectations.

So then, what would be considered running too much?  How long can you sustain running higher mileage?  Through my experience, I have found that going over the 140 mile per week mark requires a lot more attention to detail then, say, running in the 100-115 range.  I am sure once you get over the 175 and into 200 mile range your body will react a lot differently than 150.  And also, it is one thing to reach a high mark, such as 175, but it is another thing to do it consecutive weeks and even to build upon it.  If you were able to build on 175, how much can you build and how long can you hold it that high until you are injured or simply start digressing?  Even I have experienced this invincibility that comes with being at a high amount of miles, where it feels like I am floating up steep hills and when 2 hours feels like 2 minutes.  In these times though, I know that I probably am on the complete edge of my fitness, very susceptible to an injury (fine china).  Krupicka said in this post“that those times in one's running when you feel most strong, most indestructible, invincible, are the times when you are probably most vulnerable to injury because the training required to get to that point is considerable.”

There are certain values at being on the complete edge of one’s fitness. For one, it will give a lot of confidence and readiness for a 100 mile race.  It also just feels good to be fit and pushing the limits.  Maybe most importantly, it is intrinsically satisfying to travel long distances over relatively short period of times through nature.  With all that, there are apparent negative affects at being at such a high level as well.

Anton sums it up well here when it comes to sustainability: “In a moment of rare rationality today it occurred tome that I would be far more consistently mentally stable and physically sound if I lowered my mileage a touch--to a more sustainable level--that would allow me to amass week after month after year of solid training without getting hurt.”

So, it is ultimately your choice on how you train, and at what mileage you decide to reach.  The dedication and time involved to get at a high amount of miles is considerably taxing – then you have to weigh the odds of if you want to risk getting injured or not… there is always a risk though.  If your goal is to “go for broke,” you might want to push the edge a little further. If you are trying to be more sustainable, it might be best to scale back the miles so you can amass more miles over the course of an entire year, not just a short period of time to nail a race.