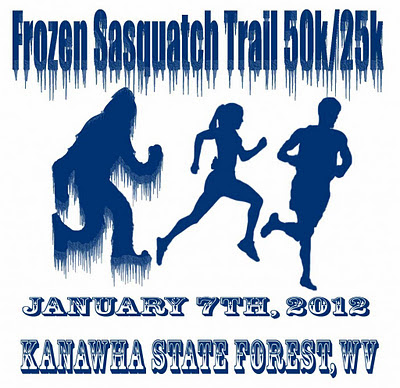 After last years race, I wrote in my blog that "I would like to see what someone could run if the ground was dry for once.  Maybe next year?"  The 2012 version of Frozen Sasquatch lived up to my delineated idea, as the unusually warm January weather from the Ohio River Valley followed my 1hr 40min drive to the Kanawha State Forest.  My goal was to break the course record of 4:30:42, ran by Eric Grossman in 2010. 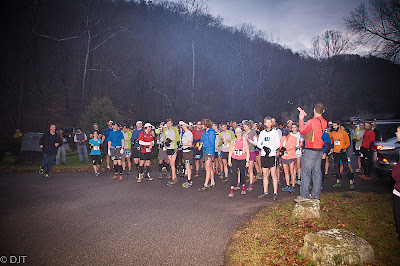 John Williams IV, a Chalahgawtha friend and fellow SSU alum, used Frozen Sasquatch as his ultra running debut and we had a gratifyingly communal and epic run together for the better part of 31 miles.  We started out in a pack of a half dozen runners, chit-chatting about the past year and year to come, and kept a relaxed and controlled pace for the first few miles. 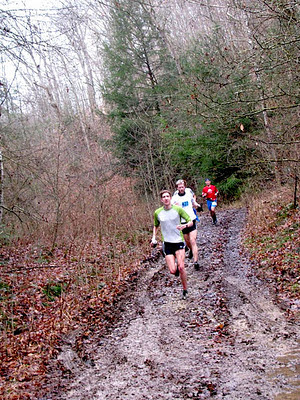 After the first aid station, John and I kept rolling through and we separated ourselves from the rest of the runners - it would be a two man race that point onward.  We were having so much fun that our hard pace was seemingly unnoticeable and taking in the mossy foliage and slick outcroppings seemed to be the duty of our day.  At one point close to the end of the first 25k loop, John stopped to water the ground and I kept going - I wondered if I would see him again. 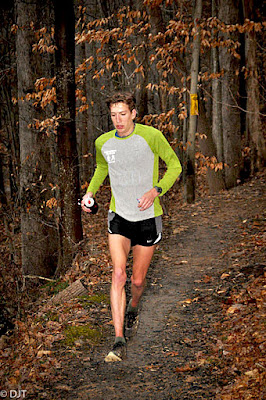 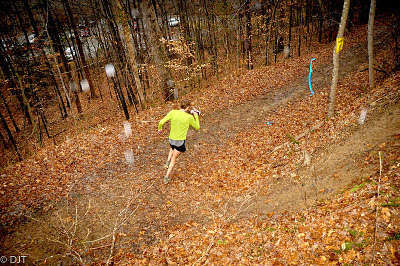 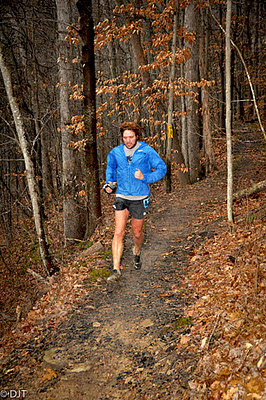 I came through the halfway point at a quick 2:02:11!  This time was faster than the my 25k course record from 2010 by over 5 minutes... I was shocked to see this time on my watch.  Shortly after heading up the beginning hill, I looked back and John was back with me.  We both remarked about how fast our first loop was and John hinted at the idea of going sub-4.  At that point for me, the thought of running another 15 miles under 2 hours was far fetched.

The onset of rain made for some slick downhill running and I obliged to let John slide in front of me.  John stopped to fill his bottle and I again took the solo lead - thinking this time there was no way John would catch back up.  This was his first ultra after all!

After grinding up a long hill, I felt the serenity of the forest and the acute solitude I had in my personal boundary on the Kanawha ridge-line.  The sun was softly coming over the rainclouds and the ethereal feeling was putting a giddy feeling in my one-two step.  I traversed through the slick singletrack not looking at my watch.  When I came back into the present I looked over my shoulder and noticed John was in my sight.  He quickly caught up to me and with 3 miles to go, we were running together again, faster than any other point in the race.

This became a bit of intense trail running as neither of us let up on pushing hard.  With common respect, we both wanted to win.  Scurrying over roots and leaping off of rocks, we did not say much to each other.  I continued to lead and wanted to last until the finishing 800 meter downhill - I had been killing the downhills all day.  We approached the last hill and I took off as hard as I could and gapped John a little and finished with a 4:05:03 making the second lap 2:02:41, a near even split.  John finished a mere 40 seconds behind me in a very impressive first ultra. 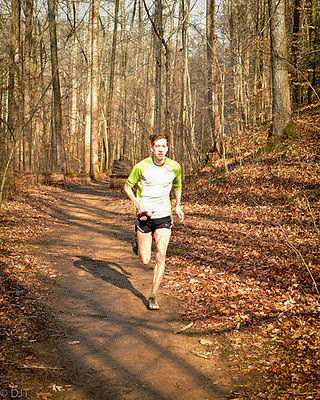 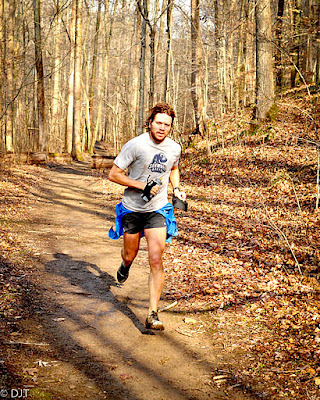 The overall day was so much fun.  I knew John had some incredible fitness built up but I never expected to be running sub-6 miles in the last 3 miles of a 50k!  If he wasn't pushing me, the time would of been a whole lot slower.  Be looking for John IV in the ultra-running elite crowd in the coming years!

Running over 30 minutes faster than last years race was a huge confidence booster for the upcoming 2012 year.  I'm looking forward to continuing my fitness and more enjoyable races in the coming months. 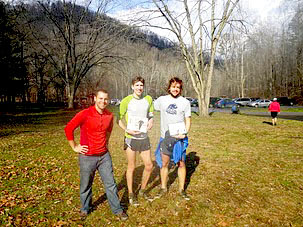