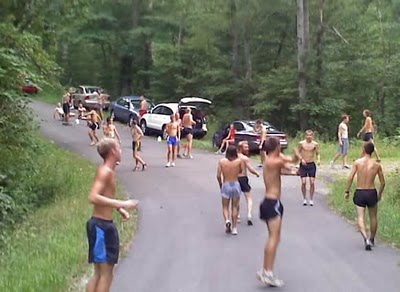 We raced through the mile at a new 5 mile time trial best at Hangover, 5:42. Eric, Keegan, and I were up front from the start; we all were locked into a solid pace. Shortly after the mile, Keegan managed to find a rock to the side of his foot, rolling his ankle worse than he ever have before. Though it was a short set back, he was right back with Erock and I within seconds. Behind us, was a battle between new freshmen, returners trying to avenge past heartbreaks, and seniors racing the 5 mile time trial for the last time. This was all just the start to an epic first chapter in the Shawnee State Bears 2010 season.

Last year, the Hangover Time Trial was somewhat of a spiritual run, Shane and I leading together step for step and ending at 29:33, together. The shared camaraderie between Shane and I will be something I will cherish forever. For this season, Shane decided to not return to school, so a repeat of that experience was not going to happen. But this year, Keegan Rathkamp is returning for his last season and him and I have ran so many miles together on trails, we knew the time trial was going to be even more of a memorable run. That is was.
Excitement had been brewing in my body for about a week before the actual time trial. I knew I was fit, I had ran Hangover weekly, sometimes more than once, so I wasn't scared about running bad. When I woke up Monday, I kept thinking to myself that this was it. This is the start of the end for me. Reece of course, had the same emotions and our day was filled mostly with talking about what was going to happen and what our strategies were going to be. Whatever we had planned, it was sure to change somewhere along the line.
Just from the moment we pulled into the parking lot, I was happy to see the team. We met at 6 pm at the school and everyone carpooled out to the forest. This was the first time I had saw a bunch of my teammates since spring and the first time I had ever met some of the freshmen. Driving out to Hangover was just like last year and the year before. We were all ready for this much talked about run. Running the warm-up and stretching with 20 other teammates was unreal. Our team is so big and there are a lot of good runners in that mix.
On the line to start the race, everyone was buzzing. Reece Brown had dropped his shorts and was bare naked beside 20 guys! He was running this thing all-natural! People will be looking back on this years from now, and it might even start a tradition. But like I said, this was only the start.
It was Eric, Keegan, and me still together at 2 miles. Our time was 11:22 total, so 5:40 for the mile; that was 22 seconds faster than last years 2 mile. After this point, some spreading out started happening. I gained a little lead up a short hill and Eric was a little ahead of Keegan. At that point I just tried to block everything out, even though it is hard to get such good runners like Keegan and Eric off your mind with 3 miles still to run. I just kept focusing on running the uphills strong and building a wider gap up hill. I could tell Erock gained a little ground on every down hill but I was confident to regain that ground on the next uphill. And really, that is how it ended up. I finished with 29:02, tying the course record. Eric was at 29:10 and Keegan was 29:20. Even though it was 18 seconds between me and third, the margin seemed a lot closer. Then, everyone else started to roll in.
In between Keegan and the next guy there was over a minute gap. Chuck was the guy in the 30:20's, a huge improvement from past years for him. Next was the performance of the day, freshman Jeremy Anderson, running in the 30:30's. That has to be a freshman record at Hangover. Fifth on the team (not counting Erock) was a naked Reece Brown, 30:44. Blake Jones was the last runner to break 31. Brad Liston was low 31 and then everyone came in. I forget the order now, but everyone finished before we started our 5 mile cool-down. We waited 10 minutes from when I finished to cool-down.
Here were my splits:
Mile 1: 5:42
Mile 2: 5:40 (11:22)
Miles 3-4: 11:52 (23:15)
Mile 5: 5:46 (29:02)
The total experience was amazing. Just the mundane task of holding off Eric and Keegan was enough to make me run harder and harder. Keegan, Eric, and I ran a lot of the cool-down together and we just talked about all of the possibilities of this upcoming season and how great we felt for just doing what we did. I was in such an emotional high, the cool-down (which is usually pretty tough) did not seem hard at all. This gives me a lot of confidence with my training and today, a day later, I know I was able to recover very well.
I am looking forward to the rest of this week and know that this just the beginning of something great. Friday will be the Alumni 5k, and I get to see if I can redo my win from last year. I have a feeling it might be a little harder this year. This team is no joke! In the mean time, I will be Running Free and having more fun than ever!
Run On
WMO
Posted by Michael Owen