Well, it happened. Something that Keegan Rathkamp and myself have talked about for a few years is running the 40 mile main loop trail at Shawnee State Forest. Reece Brown has also talked about it. Last Saturday, we finally did it. It was the perfect time to do it, Keegan is getting married in a couple of weeks and the run served as his bachelor party! Plus, Reece and I just ended our track season and the run did not interfere with any type of training. In fact, it just made us stronger. The journey was epic, unforgettable, and just plainly put, awesome.
The decision to run this came a couple of Saturdays ago when Reece and I were running a two hour run on a new section of the 40 mile loop. I mentioned something about how I couldn't wait to run the entire 40 mile loop at once. Reece replied "well lets do it." From then the logistics were figured, Keegan was called, and the party was started. Keegan arrived at Reece's house Saturday morning at around 5:30 am. We planned to start the run at around 6 am, but after packing up and driving to the trail head, we didn't start running until 7:10 am. Still a good start. The skies were blue and the sun was shining but the temperature was cool with a nice breeze. We had a perfect day of weather for our endeavor!
We parked and started our run in the parking lot behind Turkey Creek Lake and headed out on the South side of 125 first. The South side is a bit longer than the North side, and we had cheeseburgers waiting on us at Camp Oyo, around 22 or 23 miles; we wanted our "big meal" farther than halfway point rather then less than half. We had a good plan to begin, each of us lead for 20 minutes, two time, then hike/eat for a little bit. Then do that all over. That is about 2 hours of running, then a break. We wanted to go slow, no time constraints, no worries. We all guessed how long it would take us, Reeece said 7hrs 32min, I said 8hrs 52min, and Keegan said 9hrs 36min (keep this in mind).
. 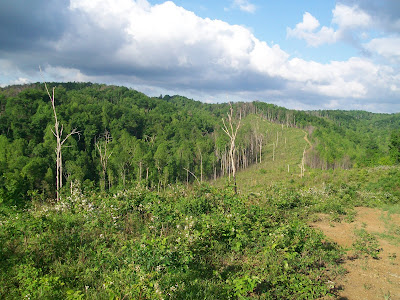 (About an hour and a half into the run, stopped at a clearing and took a few pictures.) 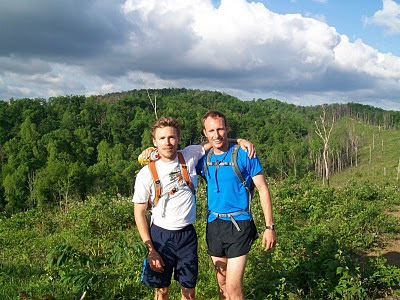 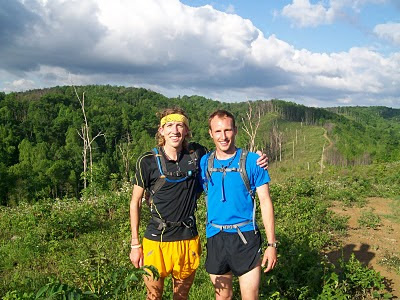 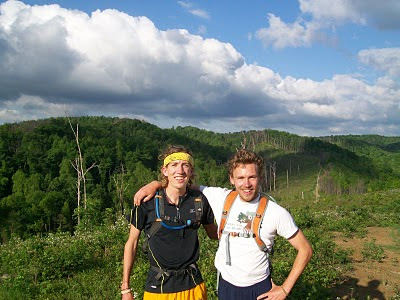 So after an early picture break we headed on to Campsite #6. We managed to miss Campsite #7 and the first water stop but none of us saw it or signs for it. Luckily it was early and we didn't need a bunch of water. We all had small packs with water as well, so this didn't hurt us. The first 2 hrs flew but and before we knew it, we were eating some grub at Campsite #6. Reece has been quoted as saying this campsite "is my favorite place in Scioto County." I ate a peanut butter and jelly sandwich and some nuts. We were probably stopped for about 10 minutes, then we hiked for a good 20 minutes while we ate some more. 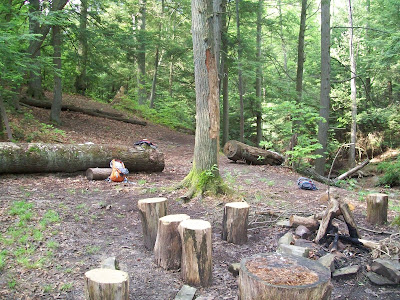 (Campsite #6, Hemlocks make it beautiful, the spot of our first stop.)

This part of the trail is just beautiful. It is all single track, running by a creek, and very clear. It is very technical though. We continued to exchange leads and reached Campsite #5. This was about 12.5 miles into the run and and we needed the water that was there. I filled up my bag and drank a lot. Even though it wasn't hot and I wasn't thirsty, I still tried to keep a conscious effort to drink a lot.

The next section of trail was rough. It was downhill, slightly slanted to the right, and very overgrown. My eyes were so fixed and concentrated on the ground ahead that it took a lot of energy to just run about a mile and a half stretch. It was very technical and ran in and out of a stream with big slippery rocks. I did not feel bad running this section, but once we crossed Pond Run and were running on a flatter, wider trail, I was exhausted. This was the only point when I was mentally fatigued during the day. We made it to Campsite #4 (15.1 miles) and took a little break to use the restroom, drink some water, and eat a cliff bar. We were all back to a good mental state and agreed to make a push to Camp Oyo, 5.2 miles away.

This stretch of running became known as the "Push to Cheeseburgers in Paradise." We stashed a cooler of food, including Cheeseburgers, Doritos's, Cliff Bars, and other things. This part of the run was one of the fastest parts. The trail was cleared fairly well and there were more downhills than ups. I can't remember the exact time it took us, but it was something around 50 minutes for that 5.2 miles to Camp Oyo. We were all happy to be finished with the bigger of the two sides of the trail (split by 125) and it felt hardcore to pop out of the tree line into the field to get to Camp Oyo. We were probably stopped for a good 30 minutes before we started back up.

Even though we just completed 22.3 miles and were less than halfway done, I knew this last part would be the roughest. This part of the trail was hilly! Hills one after another and very steep. Plus, it was that much farther into the run, with our legs entering into a whole new zone. I do not remember what our time was at this point but it was right above 5 hours, almost double the farthest I had been before!

We pushed on, to the next Campsite. Oyo was campsite #3 so we only had #2 and #1 left. It was nice to have these different sections to base our mileage off of. The trail map has the mileage in between the campsites so we knew pretty much where we were and what we had left. The last few sections were spaced out more but we had water at both of them. The hills were rough, as expected. My legs were feeling more resistance than they ever had in the past, but it was a nice feeling. I knew I was building muscle. The pace was slow, but that was good, and everyone was feeling the same emotions.

The section from Camp Oyo, through Campsite #2 and to Campsite #1 blended in pretty well. I had only ran this part a few times so it was basically new to me. The hills were all steep, the downhills all made my quads burn, and I was enjoying all of it! Although this section was our slowest, looking back I think it was our most consistent and smartest 11.5 miles. We stopped when we had to, hiked when we wanted, and kept the pace even. I was in a nice rhythm. 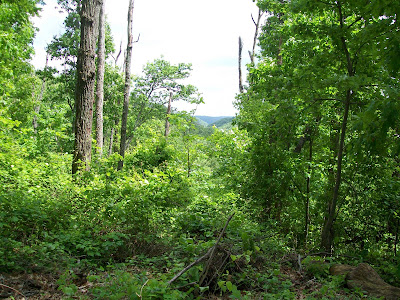 (Looking way across the Scioto Valley into the distant Kentucky Ridge.)

We reached the water stop just after Campsite #1 at around 8 hours. So, we had just ran 33.8 miles in 8 hours. This ended up being a long stop and much needed . The hill before this was very long and tiring. We all set down on the trail and just chilled. Reece even fell asleep for a few minutes! After resting, we all agreed to make another push to the finish. We all knew the last part of the trail and felt decent enough to make another push, only 6.2 miles left! 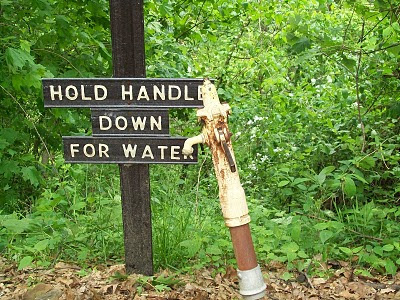 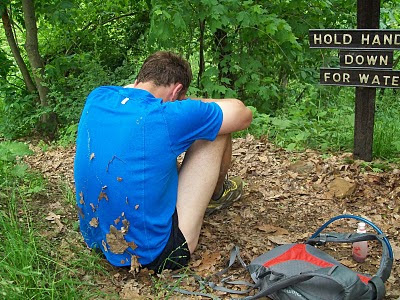 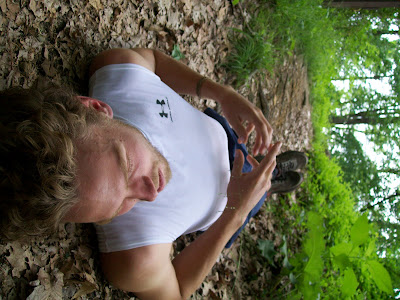 (Reece upside down after a quick nap.)

So, we started back up and ran down and across Hobey Hollow and ran up the very steep, loose graveled hill. I ended up walking a little bit up that thing. One of the nicer views was up here, pictured below. Once we crossed the gravel service road, we were on the most familiar grounds of the day. This was the part of the trail that Keegan used to bring me when I was first getting into trail running. From here, there was only 2 big uphills and 2 big downhills. Push on. 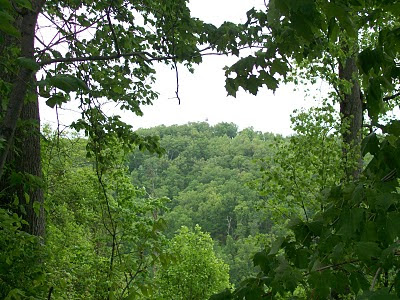 (Looking across a ridge and seeing the Fire Tower.)

This might of been the second fastest section of the day, even though it was 35+ miles in. We pushed hard on the uphills, ran a little faster on the downhills, and kept a nice pace on the flats. The last uphill came, it is called "Beasty." It is one tough hill that fools you into thinking it is over about 3 times. I mentioned to Keegan earlier that I wanted to try and run up the entire thing, without walking. Well, we did it and it felt like I had accomplished the world! It was such a great thing. Then, we were able to cruise the last 1+ mile into the parking lot where we were finished! We did it! 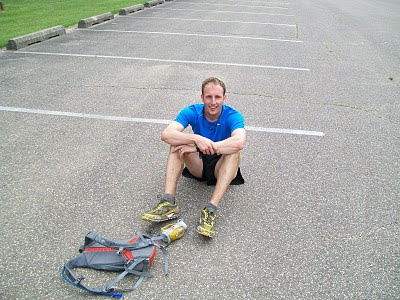 (Keegan after we finished)

The total time was 10 hours and 20 minutes. I am not sure how much time was spend on the stops, but it had to of been 2 hours or more. I will venture to estimate 8 hours of total run/hike time.

This was the most fun any run has ever been. The emotions, stories, and physical feeling that was felt during the adventure was just unreal. Still today, two days later, I do not completely realize what we did. It might sound like this was slow, which is what it was intended to be, but no one knows how rugged, hilly, and technical the Shawnee State Loop is. What makes it the hardest in my opinion is the frequency and steepness of the hills. There are not many flat areas at all and it is impossible to completely get into a rhythm, thus, making it hard to run fast. I would imagine that we are the first people to run it in less than half a day, but who knows?

The memories that were made with two of my best friends are everlasting. The stories that we can tell the rest of our lives are unreal. The experience of a long run will prepare us for many things in the future. This was all to celebrate Keegan's Bachelor Party as well, so he was able to have a great adventure before his wedding.

That night, Eric, Krista, and their two kids came out to the house for dinner. The great day was capped off with great food and great people. Then, we slept soundly for 9 much needed hours! Reece and I were able to run 9 miles the day after and I am still feeling great!

That 40 mile run was the most convenient adventure. Only a 30 minute drive for 10 hours of running. Where will this lead us?