I am always excited to get a chance to experience a top notch track meet and especially when it is at a well respected university. The past weekend, we traveled to North Carolina for the second time in three weeks for the Duke Invitational. This was the first time I had a chance to run this meet, but the year before I was in college, Eric brought some guys to Duke to race. I had heard nothing but good stories about it. It is also where Eric ran his PR, 14:13, three years ago. So, needless to say, there is always a lot of competition at Duke. I was scheduled to run the 10k at 8:45 pm, under the lights.
We drove down to Durham Thursday evening and stayed at a local hotel. All day Friday, it was clear, sunny sky's, with temperatures in the 80's. So, it was very hot. Reece and I was the only guy in the 10k, everyone else was either running the 5k, 3k, or 1500. I enjoyed some nice races from everyone while keeping in the shade and staying hydrated as much as possible. It was going to be dark for my race, but being out in the hot day would still take its toll. Luckily, there was plenty of shade around the stadium.
Speaking of the stadium, it was beautiful! It is one of the only tracks that remain in the football stadium. All other schools have separate facilities, which I think is only a temporary fad, and that schools will soon be bringing the track back in the football stadium (if there is room!). 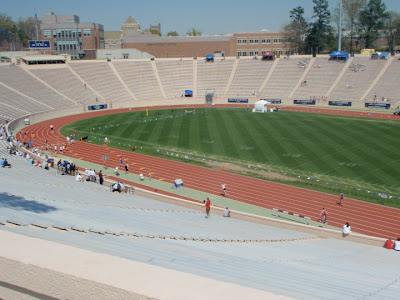 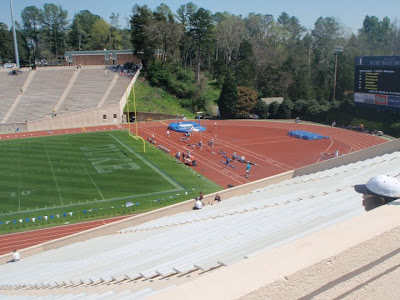 I started out in the lead. I think it is very important to get on the inside rail in order to run the shortest race possible. It is a 10,000 meter race, but I want to eliminate the chance of running 10,200 meter or something by being stuck out in lane 2. With the fitness level I was at and knowing what to expect of my competition, I was confident in being up front. Shortly though, some other people wanted to lead and I was absolutely fine with that. I just hovered in 3rd or 5th for the time being. After a couple of miles, I was still in the lead pack of about 8 runners. The first mile was at 5:01 and the second split was 9:59 (4:58). Throughout the race, the PA announcer would announce how many people was in the lead pack, that was kind of nice to get an idea of who was behind me. I continued to just stay on the inside rail in the middle of that pack.

As we got into the middle section of the race, the pace was quickening and people were pushing for the lead. As each person made a move, I kept telling myself to just go with that person. Mile three was clocked at around 14:56 (4:58) and the first 5k was at 15:33. I think at this time, there was 4 of us in the lead pack. There was a guy from Pittsburgh, Albany, and Winthrop, plus me. After the first 5k, I kept reminding myself to answer any move that the other guys in this pack tried to put on. The key was not to lead though. I casually kept in 2nd, 3rd, or 4th place. We went through mile 4 at 19:53 (4:57). Mile 4 was the fastest mile we had ran, so the race was getting fast and exciting. The lead pack dwindled to 3 people, as the Winthrop guy that led the majority of the race, dropped back a little.

During mile 5, it was just Me, the Albany guy, and the Pittsburgh guy. It was great having the entire team and Erock on the back turn cheering me on. Even though I was too focused to hear any distinct instruction, I knew they were there cheering for me and it was great! I kept in 2nd or 3rd during the 5th mile and came through at 24:53 (5:00). This mile was a little slower, but we were still pressing at top speed (or at least I was.) In the last mile, the Pitt and Albany guy really stepped it up a notch. With two or three laps to go, they left me. I could not respond to that move, unfortunately. With 400 meters to go and at the 6th mile mark, I was at 29:59 (5:06) and I ran the last 400 in 71 seconds to put me at 31:11, 1 minute and 49 seconds faster than my previous PR. My second 5k split was 15:38. I ended up getting passed by a guy from Emory and held off the Winthrop guy to finish in fourth overall. 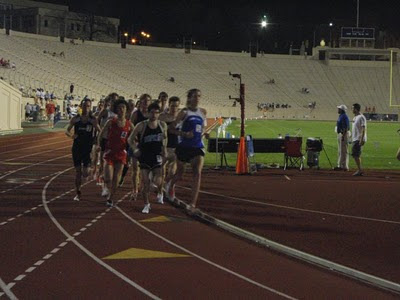 (During the first or second lap, when I led it out)

Even though I didn't respond to that last move, I still ran a great race. Those guys probably had a lot more experience than me in a 10k. This was a awesome experience and it made me into a much better runner, just based on gaining valuable race experience and confidence to run over 6 miles at sub 5 minute pace. My 5 mile split was 43 seconds faster than my 8k PR (granted that it was on a track). It is also pretty cool that I ran my 5th and 6th fastest 5k times within this 10k.