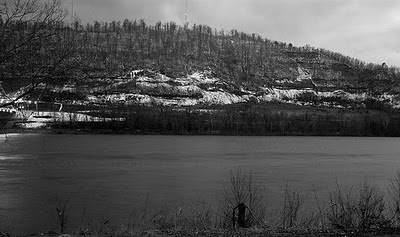 The picture above is of South Shore, Ky, a viewpoint from the shore of the Ohio River in Portsmouth, Oh. This is just west of Shawnee State University. Why am I showing this picture? Well, yesterday, I had a great amount of fun over on those hills. Since the sleet and wind was proving to be a hassle in the city, I decided to break away from the team and head into the protection of tree's. I am glad I did so, because the wind was so much less intense. I had run over in Kentucky many times, always climbing up Firework Hill to get to the trails (which are all 4-wheeler paths), and have had some good runs. I have also had one distinct bad run, around this time last year; I was attacked and bitten by a mean-hungry-big-fierce-looking pit-bull. My wound has healed and so has my forbearance of Kentucky.

This time running in Kentucky, I did not take Firework Hill, but instead followed the highway in search for another way to the top of "Microwave Ridge." I think the reason this is called "Microwave Ridge" is because of the unusual high amount of phone, radio, television, etc. towers on the ridge and the radiation they emit is at a pretty high level. After saying that, I am wondering if I should even be running over there! Anyways, I figured there were other ways up there down the road. So, I turned onto this small paved road and it ended up coming to a dead-end in a big open field past a junkyard. There were hills surrounding me so I ran along the bottom and found a trail. This was the start of a huge climb. I named the hill "Sperry Hill" (that was the name of the junkyard) and it deserved to be named! Once I got to the top, there were many different trails that went in all directions. I followed the main on for a while and turned around and finished a nice 2+ hour run.

It was nice to get onto some fresh soil and discover new places to run. All of this time, it was only a little ways across the river!