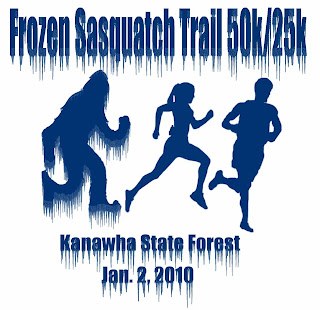 Last Saturday was one of the funnest races I have ever run. Friday, Reece and I left Pinehurst and headed to Charleston WV to run the Frozen Sasquatch 25k in the morning. The original plan was to run a race in North Carolina, but it was a longer drive and this race sounded like a lot of fun, and that it was.

We woke up to a lot of snow on the ground and sub 20 degree weather. Knowing that, the trail that the race was on was completely covered which made for slick uphills, downhills, and overall slow times. We arrived at the course fashionably late, at 7:40. The race started at 8:00. I would like to give a big thanks to Mike Dolin, the race directer and forester at Kanawha State Park. He got Reece and I into the race about a week before the race, after registration was closed and welcomed us warmly. He did a great job organizing this thing.

Without much warming up, the race started and soon entered into the first trail. I heard word that the first mile was a huge uphill climb, I was ready! A kid was right behind me until about 3/4 of the way up the hill, but I think he started to walk because I did not see anyone after that, except for a guy that was running the 50k. He (Eric Grossman, ended up winning the 50k) passed me while I went the wrong direction after the first aid station. I felt like I needed to stop since I didn't have time for breakfast (only a pear) and drank little water before. Shortly after though it was just me and the fresh snow. It was now time to relax and have some fun! 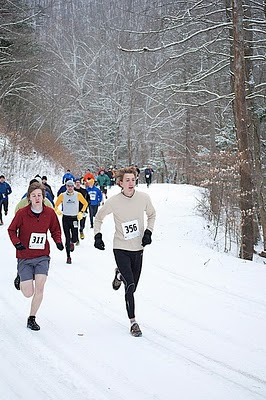 (Just after the start before we got on the trail, notice all the snow!)

Even though I went the wrong direction, the course was easy to follow, with blue ribbons hanging from tree's. I not only went the wrong direction after that aid station, I managed to go the wrong direction about a mile before that first aid station as the trail switched. I shortly realized it after about 30 seconds of non-marked trail though. Those were a small mistake that will not happen next time. I felt relatively well throughout the race. There were 3 other good size climbs after the first one. At some spots, power walking was a faster alternative since the snow was making it slick to run. The downhills had to be taken slow as well, or else I would of bee on my back, with a cold body. So, I took it easy in some parts and hard in the places that I could. I wanted to break 2 hours and during the last 5 miles or so I was pushing pretty hard. I ended up running 2:07:25. The next finisher in the 25k was 12 minutes behind and Reece was 15 minutes behind. The closest guys to me were actually 50k runners. They ran great, 4hrs and 30'smin. 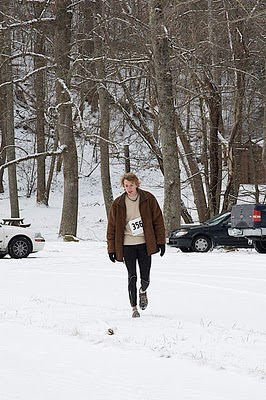 (Just after the race, I was happy to be warm!)

It was a great feeling being in the lead for a long time like that. Especially when I was making fresh tracks in the snow. Everyone else was following my footprints! Time went by fast, it always does when you are enjoying yourself! 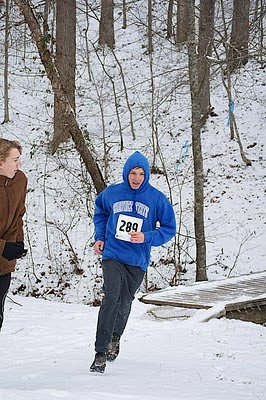 (Reece enjoying every bit of it)

After the race, I was given my awards. Every entrant got a Patagonia long sleeve shirt, which was awesome, and a carved piece of white cedar with the race logo on it. For finishing first, I received a painting of a runner and a golden ticket for a free entry to next years race. Great things to have. There were also a ton of food, soup, sandwiches, cookies, hot tea, hot chocolate, etc, etc...... Reece and I met some cool guys and had a fantastic time. It was a great way to start a new year!