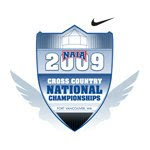 I said I would give a race recap of Nationals. So, here it is........
Saturday morning was just like any other race day. I think everyone had adjusted to the time change fairly well and were getting a full nights rest. Still it was weird to think that it was 10 AM in Ohio while we were waking up at 7 AM. Our race started at 10:30, so we were up early to get a little grub and have time to relax before it was time to get ready. I had my usual toasted bagel with drizzled honey and waited till 9:30 to warm up. Since our hotel was less than 4 minutes from the course, we warmed up from the hotel and someone drove our clothe and spikes to the start line.
The course was a mess. It had rained the night before and a lot of people had been tramping around the course the previous 4 days. This type of condition always plays to our advantage since we are a bunch of "blue collar" runners who aren't afraid to get nasty. To give a little detail on the course, it is very viewer friendly, and in my opinion not very runner friendly. It was a 4 loop of 2k's each, crossing a road 8 times total, with a lot of 90 degree turns. That coupled with mud was going to bring slow times. Plus, the course was very narrow and funneled into a 10 foot path within the first 800 meters. At that 800 meters, there was a 100 degree turn, this made the race a literal fight from the start.
So, that is how the race started. There were a lot of people that fell and many pushing, grabbing, and tripping. I was out pretty fast but was not ready to get pounded around the turn. I got pushed out to the far side and even was brushing against the ropes. I was passed by most of the field and my entire team. To add on that, my legs did not feel good but I was battling physically and mentally to stay in the race.
I had no idea how my teammates were doing and no idea where anybody was in the field. I actually thought I was our 5th man, but by the time I finished, I learned I was our 7th man! "Great" I thought, we did not do as bad as I thought! I learned that Corey ran incredible and finished 24th! All-American! Next that came in was Galen Dills. Galen was the only person that I remember ahead of me at the beginning. Around the same turn I got shoved around, he lost one of his spikes. He decided to keep going and ran the last 4.5 without a shoe. He came in 49th, with a mangled foot, with gashes and a bruised heel. A gutsy performance under the most pressure. Our 3rd man was sophomore Shane Meyer! He also ran incredible! He finished 61st and had the best race of his short career. Josh Linkous and Tyler Hickey came in 4th and 5th, finishing 69th and 82nd respectively. Tyler picked up the slack where I normally would be, and helped our team finish with a strong top 5. Chuck Wentz and I were 131st and 156th. I never got rolling........
So, Shawnee State put out some nice performances Saturday and we anxiously waited on the team results. This was another big complaint everyone had. The results never came while we were at the course. We didn't hear the official results until they announced the top ten nearly 3 hours later at the awards ceremony. As they started naming off the top ten, we listened in silence for Shawnee State to be called. The top 4 teams would be called on the stage for pictures and awards. A big sigh and jubilant celebration happened when we heard "7th, Aquinas, 6th, Simon Fraser, 5th Embry-Riddle....." And the celebration started. We heard next, "In fourth place with 229 points, Shawnee State University!" Even though I did not have a good race and finished farther back than I could of even imagined, all emotion turned into excitement and pure joy. We all ran to the stage, hugging and laughing as we posed for our pictures. This ranks up there with some memorable moments in my life. 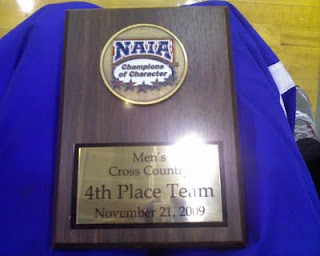 (Our 4th place plaque!)
My........ OUR Shawnee State Bears are 4th in the NAIA!
RESULTS:
http://naia.cstv.com/sports/m-xc/stats/2009-2010/2009naianationalxcchampsmenteam.html
Malone won their third straight team title, Cornerstone was second, and Southern Oregon finished 3rd. Total for the entire year, we were only beat by 5 teams, Ohio State, Malone, Aquinas, Southern Oregon, and Cornerstone! What an incredible year. I am truly happy that I have teammates. I had a very bad race, but Galen, Shane, and Hickey all stepped it up to more than make up for the difference.
We are the Shawnee State Bears, Running Free! 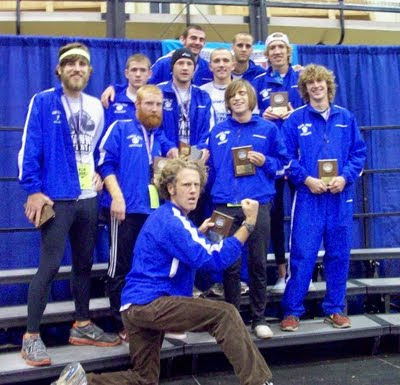