Fourth meet of the year is done and over with. Seems like the season has flew by and it is already over half way over. Now, we only have Aquinas 2 weeks from now, Conference 4 weeks from now, and Nationals 4 weeks from now. How exciting. I need to cherish these last 6 weeks a little, because they are going to be something magical. Hopefully, this blog will serve as a nice reminder of all the great memories I have had this season and the many memories still to come.
This past weekend was our first overnight trip of the year. It was nice to go out to eat at Olive Garden with the team and enjoy some nice food. Corey, Paul, Shane, Blake, and I were the best dressed men in Terre Haute, we looked good, I must say: 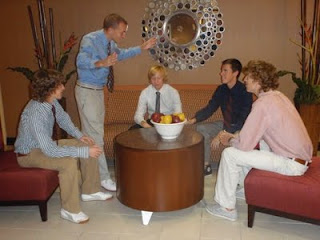 (Holding our business meeting after dinner.) 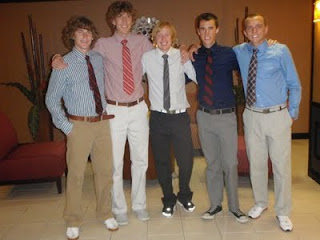 (Here we are, all dressed up.)
So, we had a good time on Friday night before the meet. Corey and I were roommates and we got to bed a little before midnight. I love staying at Hampton Inns; they have the best beds and pillows I have slept on. So, my nights rest was peaceful and full. Woke up, and it was Race Day! I shoved down my normal toasted bagel with honey and we loaded onto the bus for our trip to the course.
The course was awesome. Terre Haute is the site for many Junior Championship, D1 National, and Pre-Nat races for cross country. It is basically a big field with a huge loop, with separate little loops for different distances. It rained the entire week leading up to the race, but the day of the race, it was sunny and dry. The course was still very wet, but there was no mud. The course had a basic drain system, but there were still a lot of standing water.
The gun went off, and it was a fast start with about 30 teams racing for first. I established a decent position from the start. I was not in the top 10 though like I wanted to be. It was also different to have two Cedarville guys on both sides of me, but that soon changed. During the first mile, my guys got with me, about 6 other Bears were right with me. Sometime during the first mile I decided to try and get up with the first pack. I made a long surge and jumped about 20 spots to get on the rear end of the front pack. Even though no one from my team went with me, I think my move got my team moving. I went through the first mile at 5 flat and that was the last split I heard.
After the first mile, the rest of the team was up with me, Linkous went to the front 5 and Corey followed shortly. Shane and I were a few seconds back through 2 miles and we were looking good. Sometime during the 3rd mile, Linkous fell off the front pack and I pushed to help him out. I was leading the chase pack and started surging to get him. I caught him shortly after 5k and we were able to work together the rest of the race. Corey was still among the front 5 pack.
During the race, a guy on the loud speaker gave race updates as the race went on. Shortly after everyone realized Shawnee State was controlling the race, the announcer started saying stuff like, "At 5k, looks like Shawnee State has 5 guys in the top 15 of the race." Then, 10 seconds later he would say, "Make that 8 guys in the top 25 for Shawnee State." It was awesome hearing this and it gave me more motivation. Also, near the end of the race, the announcer was announcing that Corey was challenging for the lead with another kid. That was the first race where I heard these kind of things over the loud speakers. I liked it!
So, the race pretty much finished how it was at 5k. Corey had the lead with about 400 meters left but a kid from Wabash out kicked him. So, he finished 2nd overall. I had a lead on Linkous with a little bit to go but he got me down the last stretched, as did a couple other guys. Linkous finished 5th and I was 8th. The times were all around 26 flat, I was 26:08. So, the course ended up being a little slow with all of the water! Too bad because we were flying! Galen, Chuck, Hickey, Shane, and Joe finished 10, 11, 14, 16, and 22 respectively. As we crossed the finish line, the announcer said, "Looks like Shawnee already has their top 7 in and will be taking home the Gold!" Very uplifting.
RESULTS:
http://www.rose-hulman.edu/sports/mcountry/09cross-gibson-story.htm
We won the meet and beat some nice teams. Purdue was the toughest team there, and we beat them by 32 points. We only scored 31 points! The less the better. We had a great day and still aren't satisfied. Two weeks from now we go to Aquinas where we look to get some fast times and run against a few top 10 ranked NAIA schools. It will be the first test against other NAIA schools. We have two weeks to prepare and get better. We are having a magical season so far, and it is going to end up magical.
We are the Bears! And I am Michael Owen! Running Free! 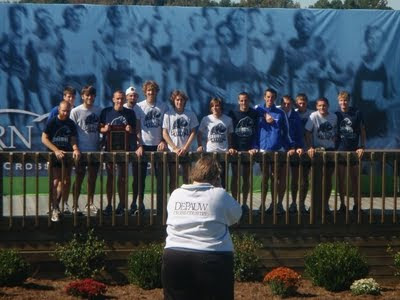