This weekend was one to remember; my third trip to All Ohio. This course had been a nightmare for me the past two years. My freshman year, I ran 27:42, with temperatures in the high 80's! Last year, I ran slower, 27:47, and it was hot again. With the course already being the most difficult around, those conditions did not make it any better. And this year the conditions were no different. Rain every day a week prior to Friday had the course wet and muddy. But, I was ready, we were ready! How can we not of been when we were busting out workouts at Hangover in the pouring down rain!?

I woke up on Friday expecting to run a little 2 mile shakeout run, but it was raining cats and dogs outside, so I decided it would not be worth getting wet and a chance of getting sick on the morning of the race! On our way to the race, we stopped at Bob Evans where enjoyed some multi-grain pancakes with very light syrup. This meal seemed to work really well for me in the past, so I went with it again because I knew my body would handle it.

I'll skip to the race since the in between stuff is pretty boring and the same stuff as it always is....

I got out to a really nice start. I was sitting with the leaders from the gun, in the top ten. There was mostly Ohio State guys, Malone guys, a few Cincy guys, and me up there. It was an awesome experience being up there only seeing 5 guys in front of me, especially here at All-Ohio, where my best finish was 63rd. I kept telling myself I belonged up there and that I could run with these guys. I came through the mile in 5:02; I was in 12th at that point. To give a little break down of the course: the first two miles are the easiest ones on the course. There are fewer hills, plus you are with more people. The third and fourth miles are very tough, with a lot a crippling hills. The last mile can be fast, unless you are completely dead. The finishes is a 300 meter flat stretch lined with the spectators, it is awesome. So, with all the mud, the ups and downs were slippery and soggy.

The second mile was pretty relaxed. I ran with a few guys from Malone during this mile and Corey got up with me. I got passed by several people, but I was still holding my spot. I came through in 10:17, so a 5:15 second mile. I was in 17th place here. It was nice having Corey running with me, we never really ran beside each other but we were still able to work together in order to catch guys in front of us.

This is when the work really started. The third mile has a couple good sized hills. Corey and I passed a few people because I was in 14th at the 3 mile, with a time of 15:55 (5:38), Corey was right beside me. At this point, it was nice knowing SSU was faring well because I saw Galen behind me on one of the turns and I knew without a doubt that Linkous and Shane were close to him. It was hard getting passed by people and it was hard passing people, because the mud was making it hard to get rolling.

Nothing happened during the fifth mile. It was pretty boring and it seemed to be over before it started! Bryce Wilson, from Rio Grande left me and Corey, and the Cincinnati guy that finished ahead of us was barely out of our reach. We tried for him down the stretch though. So, I finished 13th place! And Corey was .5 seconds behind me in 14th! Our time was 27:00.1 and 27:00.6! 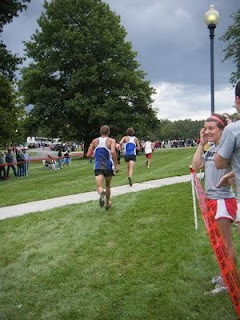 What was awesome about the finish was when Corey and I looked back, there was Galen, there was Shane, and there was Linkous, all within 34 seconds from us. Out top 5 really came in strong, Linkous was 26th, Shane was 22nd, Galen was 19th, and then Corey and I. After seeing this I knew we had to of finished 3rd place. Ohio State had 5 guys in the top 10. Malone had 2 guys in front of me and even though our 5th man finished before their 5th, they still beat us by 18 points. Shawnee State, 3rd place overall at All Ohio! We beat teams like Ohio, Cincinnati, ONU, and anyone else. Granted, Miami, Kent St., and Dayton didn't run, but still we performed and ran an amazing race. I could not have been any happier, celebrating this with my team! What a great race!

It was also awesome having a nice supporting cast there. Blake Jones, Reece Brown, and Paul Webb were everywhere on the course! I had to see them like 15 times! The woman's team was also very supportive during the race. Cant forget my family as well. Both of my grandpa's came with my parents. They have my back in anything that I do and support me like no other. Tyler Kearns also rode up with them to experience his first cross country meet. I am glad we were able to give him a good one! I need to think about all of my fans and not take them for granted. They are really awesome.
RESULTS:
http://bishops.owu.edu/alohxc09/index.html

That night, Reece, Wysocki, and CC came over to my house and we did 1 hr and 40 minutes of Yoga X. Too bad Shane and Paul went home, or else they would have been there too. This was really intense, and soothing at time. Good bonding experience with the guys. Nice way to wrap up a great day!

Saturday some of the team did a 100 minute run in town. This was a nice run because everyone was in good spirits and the weather was amazing. Today, Corey, Linkous, Hornick, Reece, and I went out to Hangover to run 12 miles. I felt really good. Got 85 miles in for the week, and I feel great.

This upcoming week, we run at Terra Haute, Indiana. Time to get some fast racing in; I heard the course was amazing. We have to keep looking forward and working hard, because this season can be something huge. I am ready for it! I can't wait for everything!