Writings of a Runner

It has been a while since I have posted a blog, since last Wednesday. My week since then was pretty busy. I made a trip home on Friday evening and when I am home it is hard to do anything on the internet since all we have at our house is dial up. It would literally take two hours to load this website! Now, Monday, I am back in Portsmouth to the modern luxury's, or maybe non-luxury's of fast internet and time wasted on it.

Friday, like I mentioned, I made my way back to Meigs county. I drove through Huntington and picked up my bike! This proved to be one of the happiest moments of the summer for me. Over $920 worth and nearly three months of research and buying came to a close when I loaded the bike in my car. Building my own bike was one of the goals I wrote down at the beginning of the summer. And, this completed the checklist, so summer was a success, as it is coming to a close at the end of the week. 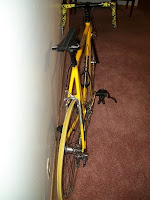 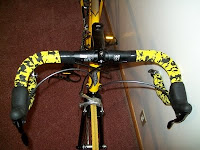 Now, I had to wait another hour and a half until I got back home to test the bike out. I was itching at the bone the entire trip home. That is no lie. Once I got home I unloaded the bike, popped the tires back on and took it for a first time spin. This was by far the best bike I had ever ridden. The gears worked for a change, so did the brakes, and it was simply smooth on the road and very efficient. A large upgrade from the Western Flyer to say the least. Later I road over to grandpa's house to show him the bike, the trip was fast.

Later Friady night, Jon got back from work and we cooked up a delicious meal. On the grill, we had chicken with a little lemon and Italian herb topping it along with fresh cut up squash getting a little crisp. Inside, we made a fresh salad topped with fresh tomato's, peppers, soy beans, and a little balsamic vinaigrette dressing. To add to the main course, we quickly microwaved some home grown potatoes and. The meal was very delicious and it was another piece to my summer goals, eat and fix some good food.

Friday at around 10 pm, I went for my run. Due to the traveling, riding, cooking, and eating, my run was prolonged to the darkened back roads of the Rocksprings area. I had planned on running only 5 miles since I was racing the next morning. But, once I got going, my legs were as fresh as fresh could be and night time running is an amazing feeling, so I ended up doing 10 miles instead. nighttime running is almost as good as running in the rain, maybe better. Strides feel smooth and everything around the road seems to not even be there, just an image in the blackened night. So, the run ended after 11 pm and it was bedtime for me!

Saturday morning, I woke early and got a quick breakfast. I then headed up to Tuppers Plains for the second annual Eagle 5k. The trip up there was unusual, because the road was blurred by some of the most intense fog I had ever seen. I was literally driving only be able to see five feet ahead of me. last year at this race I got second place, behind Chris Davis. This year, he came again and brought Soorma and another kid names Matt from OU. So, the competition was tougher than last year. A quick overview of the course: It starts at the Methodist Church in TP, the first mile makes it way though the Arbould District, which had one big hill and many 90 degree turns. The second mile has two big hills, including the one that goes through the industrial park. The last mile goes through the first mile with the same big hill and slow turns. So, what I am trying to say it that, THIS COURSE IS SLOW.

The race started, and the 3 OU guys, me, and Cody Wolfe, a freshman from Southern took the lead. We were all together through the first mile and a half when the freshman kid dropped off. I was surprised that he stayed with us that long. He ended up running 17:30 and getting 5th place, very impressive. So, it was just the OU guys and I for the rest of the race, which is how I figured it would be. Soon after the biggest hill in the race and the two mile mark, Matt and I fell off of Soorma and Chris. I was dead. I kept them in a close view in case I felt better at the end but that view got farther and farther away. I held off the other OU kid and ended up getting 3rd. I was 10 second behind Soorma and Chris, Chris took the win for the second year in a row. My time was 16:40, slower than last year by a few seconds, but with a 5k course comparable to All-Ohio, I was pleased. Plus, 5 minutes after the race, my heart rate was down close to a normal beat. I am in a great fitness level, another summer goal. I cooled down, received my plaque, and chatted with some old friends and the day was complete.

Sunday, I woke up and quickly dressed for church. Seems like I have been in a hurry on Sunday mornings ever since I can remember. I sat in for Jeff's lesson, which was really good. After that, Brother David delivered a great sermon.

After church, Mom, Dad, and I went to the Mexican restaurantn for lunch. I scarfed down my Pollo Ranchero (my normal meal there) with great delight. Food is one of my favorite things in life, all types of food. When we got home I began to pack my bags and load my car. I rode my bike over to Andrews real quick to show him my bike. Visited there for a while and road back. Loaded my bike, said my goodbyes, and headed back to the great city of Portsmouth, I met Blake to run at 7, we did 5 miles and met with Kammler and Erock at 8 to run 8 more. Except they were planning on running 12 so we tagged along. Me and Blake ended up doing 15 miles, I felt amazing. One of the best long runs this summer for me.

So, the weened was a great one. Met my goals for the summer and got some quality running in. Those words have been dominating my life the past 3 years now. 'Running, runner'. That is me, Michael Owen, defined by the word 'Runner'. I am much more than just a 'Runner', but that is what people see me as. And I will take it. Because, I enjoy Running Free; this is my life. 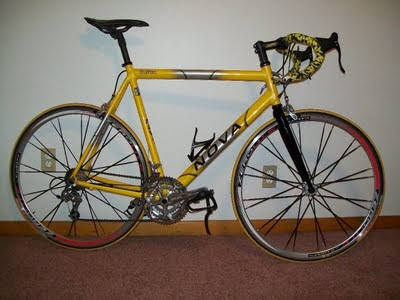